On our previous article we took a chronological look back at the Playmates collection of Star Trek figures and accessories which ran from 1992-1999.
This time around we'd like to give you a look at some of our favorite pieces from our collection here at the Nostalgia Factory. 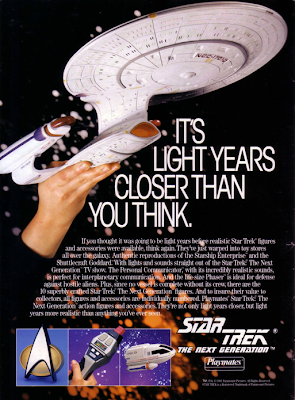 Many of us here at the Nostalgia Factory grew up playing with these great toys. We didn't just keep them all mint on card. We ripped a lot of these packages open and went on multiple adventures with our favorite characters across the galaxy of our backyard, bedroom, and school yard. We did manage to keep a few mint on card, and sometimes we even purchased doubles of our favorite figures -- one for playing, another for posterity, but with the financial limitations of childhood buying doubles proved a difficult task most of the times. 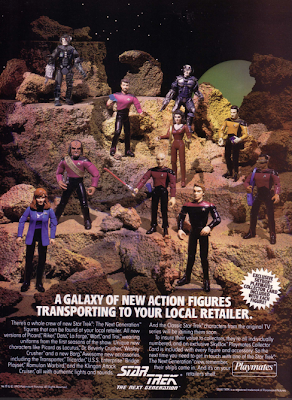 Playmates' print ad for their second wave of TNG figures (1993). 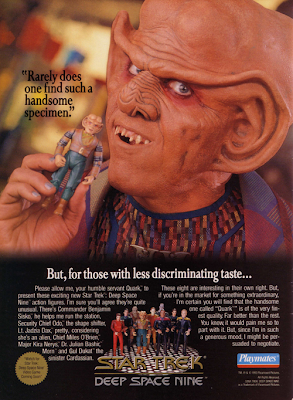 The images we'll share with you on this article include figures, ships, playsets, and accesories from our own personal collections. We'd also love to get your thougts on our picks and your own personal list of faves. Feel free to share those with all of us in the comments section. 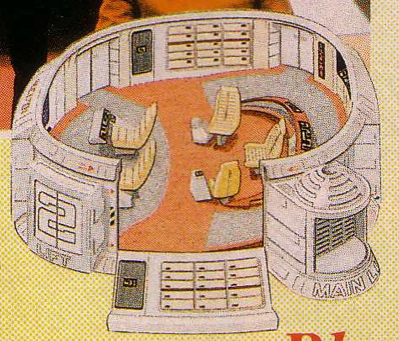 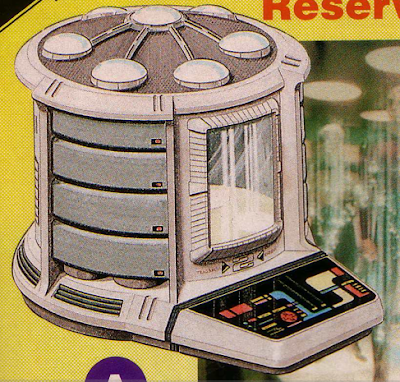 
Lets kick things off with one of our favorite playsets: 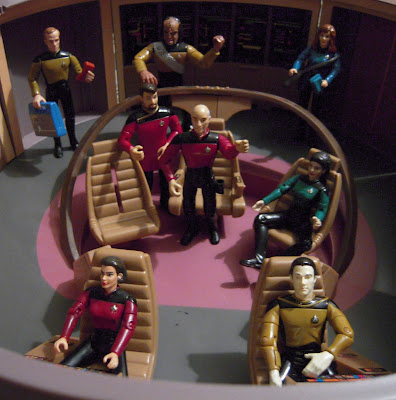 For a kid who loved Star Trek The Next Generation this was the ultimate Christmas gift. I got this (along with the Transporter room set) on Christmas morning 1993 and I loved it.
Playsets never really tend to look too close to the TV show environment they recreate but this baby had all the details you could want. Worf's horseshoe console had a series of buttons which activated all the lights and sounds as well as fired phasers and photon torpedoes. You could hear and see the weapons hit a Romulan Bird of Prey on the main viewscreen.
The only complaint my brother and I had about the playset was with the viewscreen. The screen had no way for you to change the Romulan Warbird Image. It would've been great if Playmates would've had the image work as a series of swappable slides so you could replace it with other ships or space environments. Anyhow that was just a minor issue since the playset offered so much play value and it looked very screen accurate. 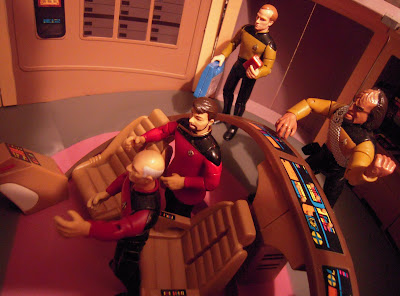 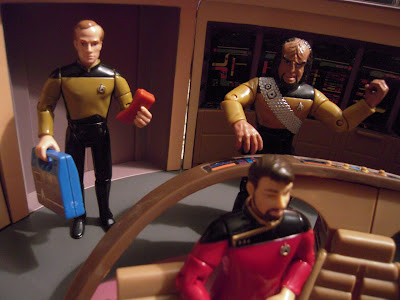 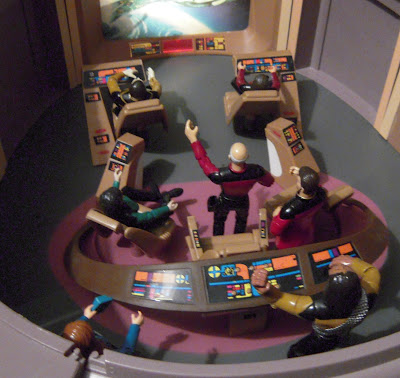 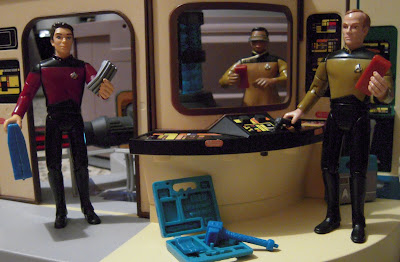 Originally scheduled to be released as part of the TNG line, this set ended up coming out with the Generations line in the fall of 1994. Although it could be found on store shelves a few months before the rest of the Generations assortment. Just like the Bridge playset this set looks just like the environment it recreates from the TNG series. The warp core looks amazing and the sound effects combined with the pulsating light effect is just like what we see on the show. The core even opens up allowing you to insert Dylithium crystals. 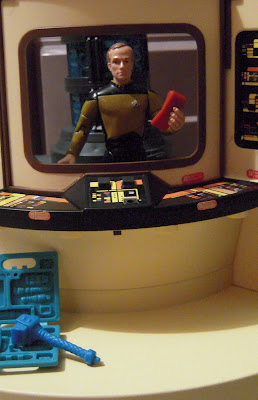 The set also features a warp core breach function, which as many TNG fans know was always Geordi's biggest pain in the ass. He was always minutes away from a warp core breach or fighting a coolant leak. You can recreate those moments with this set as it offers the exact same lights and sound effects we hear on the show as the warp core appears to be going through a bad case of dylithium indigestion. You can prevent the warp core breach by having Geordi use a handy tool the set comes with which shuts down the core. A pretty clever function. If only Geordi had it that simple in the movie we never would've lost the Enterprise-D. 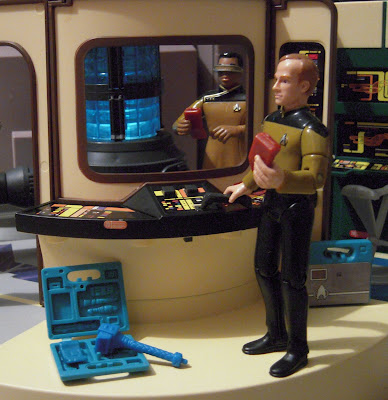 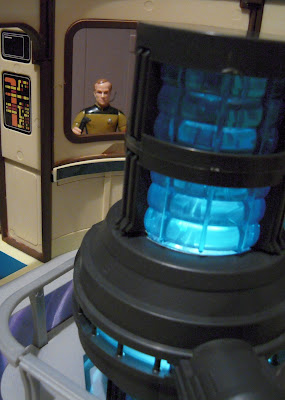 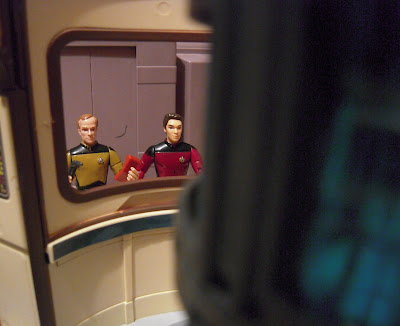 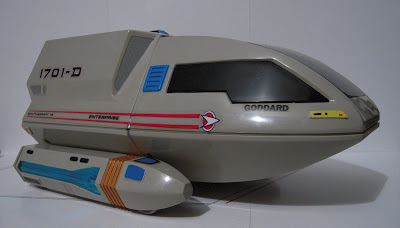 I loved taking my toys on away missions and the Goddard was always there for me.
This ship was a lot more fun than the others in the line since it was made to scale with the action figures. You could use any figure to pilot the ship in the cockpit and also carry additional figures or supplies in the ships cargo hold. Lights and sounds features provided warp speed sound effects as well as illuminating the nacelles. 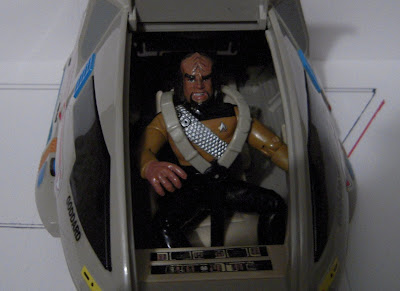 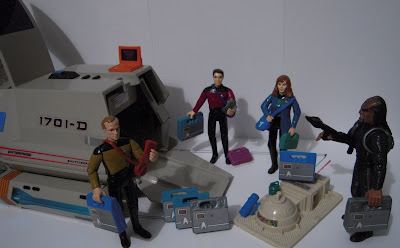 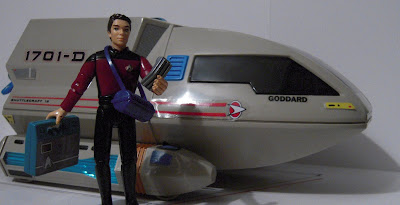 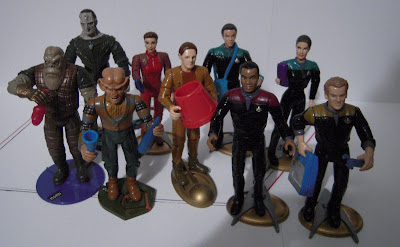 I have always been a huge fan of DS9 so I couldn't wait to get figures from my favorite Trek show. My introduction to Star Trek was The Next Generation, but Deep Space Nine turned me into a hardcore fan. These figures looked great and the amount of accessories we got with each figure was mind-blowing. Quark and Morn even come with bar-wear. Too bad we never got a DS9 Promenade or a Quark's bar playset. 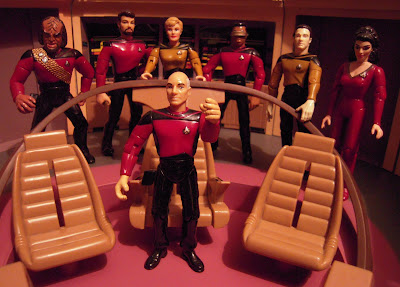 A great thing about Playmates was that when they made multiple versions of the same character they still payed a great deal of attention to detail and made the right choices about what alterations to make. This line up of figures as seen during the early TNG episodes was incredible. When Playmates released a Tasha Yar figure in 1995 we were finally able to have a full crew complement to recreate the adventures of the Enterprise-D during their early voyages. Unfortunately we never got a Wesley Crusher with his first year outfit, but he rarely spent any time on the bridge that first year anyways. 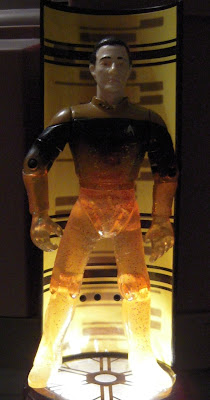 Data has always been my favorite TNG character and this Transporter series edition offers one of the coolest features of any action figure ever made. With the transport bases these figures allowed you to recreate the look of your favorite character as he is going through the transportation process. Another very clever idea from the folks at Playmates. This sort of creativity is what made the line such a treat for fans. 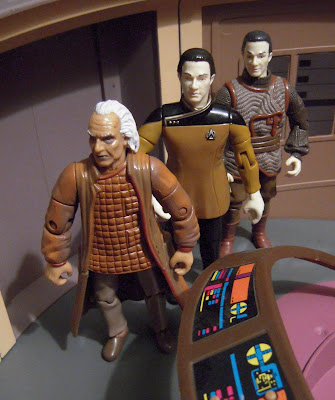 As I said before Data is my favorite character and I was very happy to be able to get figures based on the two members of his dysfunctional family -- his creator / father figure, Doctor Soong and his early prototype / brother figure, Lore. 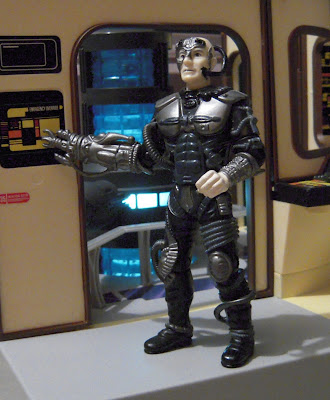 The Borg were the coolest villains in the galaxy during the TNG era. Playmates made some really cool figures based on these drones (with the exception of their First Contact version). Locutus and Hugh had some of the best sculpts in the line and featured highly detailed accessories. These were top notch figures. The tubing, hoses, and appliances sculpted on these figures make them look even more detailed than the Art Asylum Locutus figure. 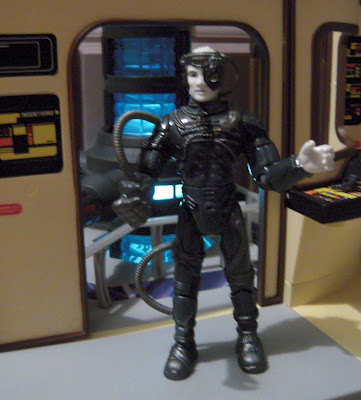 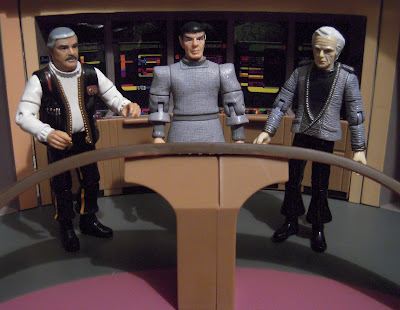 Seeing characters from the original series on TNG was every fan's dream. I was very excited to finally get figures based on these character's respective 24th century appearances.
Playmates treated us to figures of Scotty as seen in the episode "Relics", Spock as seen in the episode "Unification", and Admiral McCoy from one of the most endearing scenes in TNG's seven year run during the show's pilot telefilm "Encounter at Farpoint". 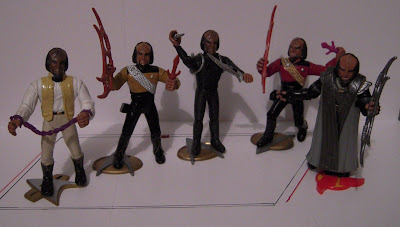 Michal Dorn was one lucky actor. He is probably the Trek cast member with the most figures released since his character was a regular on two trek series and made appearances on four of the feature films (five if you count him playing his grandfather in Star Trek 6).
Worf got some of the coolest accessories and outfits from all the characters in trek history and the multiple figures released did the character great justice. I loved the Away team Worf with his black ops-like uniform as seen in the TNG two parter "Birthright". 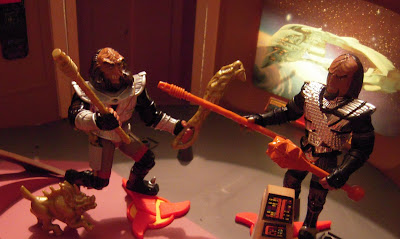 His Klingon ceremonial outfit figures were also highly detailed and a great deal of fun to play with. When Worf made the move over to DS9 we also got more figures of our beloved Klingon Warrior, and the DS9 duty uniform Worf is definitively one of my favorites. 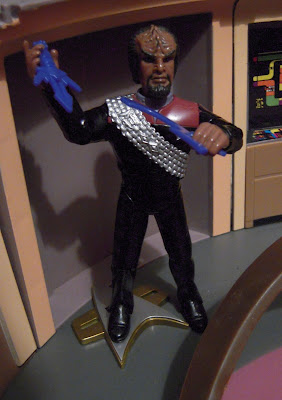 Star Trek The Next Generation Tricorder (1993) 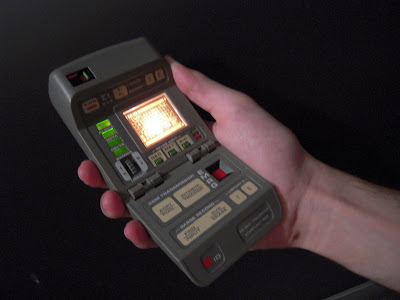 This is by far the greatest piece of Starfleet gear ever created and the coolest toy role play item ever released. When I first read about this item in the pages of Star Trek communicator I knew I needed to get my hands on one of these babies ASAP in order to make my future away missions a guaranteed success. I begged my mom to take me to Toys R Us almost every weekend to check if it had come in already. Unfortunately it took a few months for this piece to get released and The Communicator Magazine didn't really warn about that. When I finally got it it was everything I dreamed of and more. The attention to detail, the lights and sounds, even the Starfleet scientific read out on the light up screen made this the ideal item for a kid with a very active imagination who loved to go on away missions. 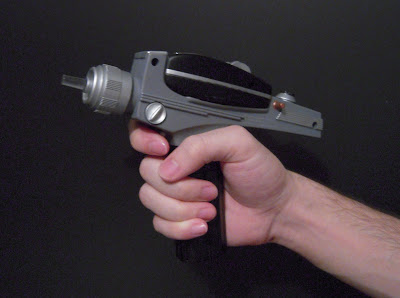 Back in 1994, before the advent of such companies as Master Replicas, Playmates was truly the best source for recreations of our favorite props from the Trek universe. This classic Phaser looked as close to a filming model as a mass produced 14 dollar item can. It actually still holds up. I reexamined it recently and even compared it to the more current version from Art Asylum/DST and there really isn't a great deal of difference over the two. Yes, Art Asylum has added more detail but remember this item was released 15 years ago. This was the perfect accessory for fans dressing up as original crew members at conventions for many years until Art Asylum came on the scene. Playmates was truly creating pieces ahead of their time and for that this now classic toy line will always have a special place in our hearts.
Posted by The Nostalgic Gangsta at 4:07 PM 2 comments: