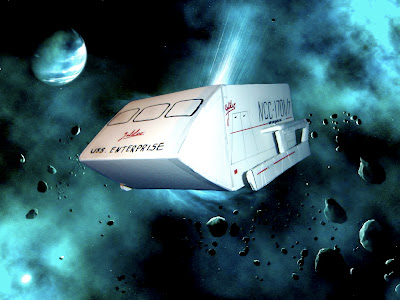 Our good friend and contributor DJTITOFLOW recently created this awesome foam board Galileo 7 shuttle. Head on over to his blog for a great article detailing the creation of this ship and his use for it on a school project. 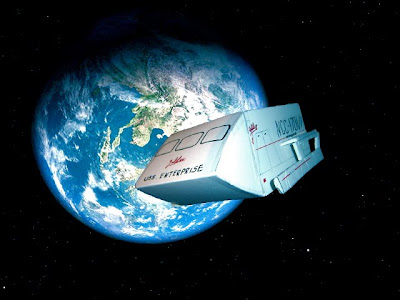 Return of the Starfleet Utility Belt... 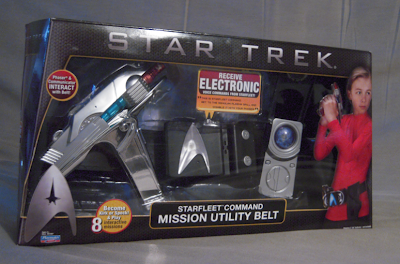 The new Starfleet utility belt from Playmates Star Trek movie line is a welcome addition to an already great toy line. The folks at Playmates have really impressed me this year with their wide range of products based on the new film. The utility belt is a great toy for kids, the kind of toy I would've gone crazy for as a kid and would've gotten hours of fun and imaginative play out of. 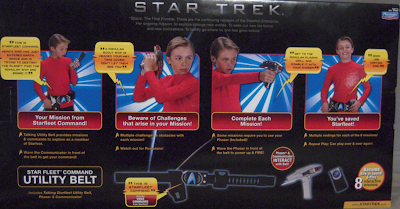 The packaging is very nice and exciting since it gives kids a look at everything thats included on the set and once you open it up you'll find some of the coolest looking toy replicas available right now for any movie or TV show. The only complaint I have about this set is that the belt can only be adjusted up to 28 inches, but it wouldn't be too difficult to rig something up in order to extend it by adding some width to it for the back so adults can wear it too. The holsters for the communicator and the phaser are pretty sturdy and the previously released electronic movie phaser and communicator fit perfectly in them. The perfect way to play with this is to add the electronic phaser since the one this set comes with has no lights or sounds, but the phaser in this set looks much better than the previous one which suffered from a weird dulling and peeling of its shiny coat. 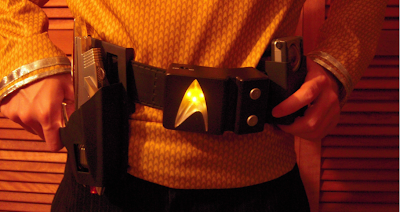 The big draw here for kids is the electronic unit in the belt which features lights and sounds and the ability to receive a series of messages from Starfleet for either Kirk or Spock so kids can decide what character they want to play as. The messages send kids on a variety of missions. You also get great sound effects like the transporter beam and communicator chirp. 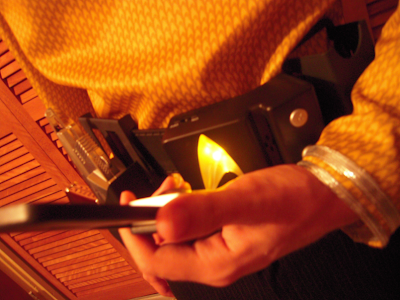 The delta insignia in the middle of the utility belt buckle lights up -- yellow for Kirk and blue for Spock. Another great little detail which makes this toy even cooler. By placing the communicator in front of the insignia kids can hear all the messages from Strarfleet sending them on eight different missions. 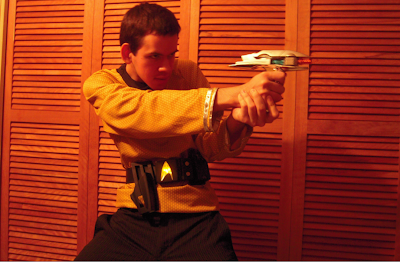 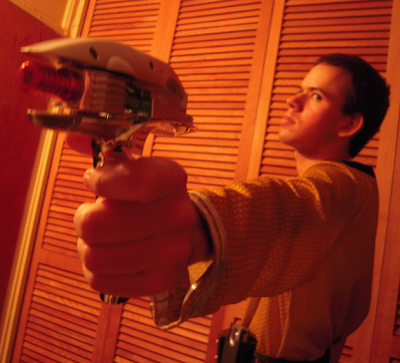 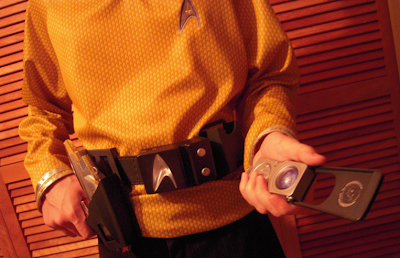 I really love the way these accesories look. To me they are just as good as any prop out there at the cost of a toy. This is the kind of toy that offers kids the ability to use their imagination while at the same time making them feel closer to being a part of the movie. Kids can continue the adventure with their friends long after having watched the film. When I was growing up I used to love playing out scenarios from my favorite films or TV shows with my friends. The new generation of Trek fans are very fortunate to have such a great variety of toys to continue the adventure for the next couple of years until the next voyage of the Enterprise hits the screen.
Posted by The Nostalgic Gangsta at 8:44 PM 4 comments: 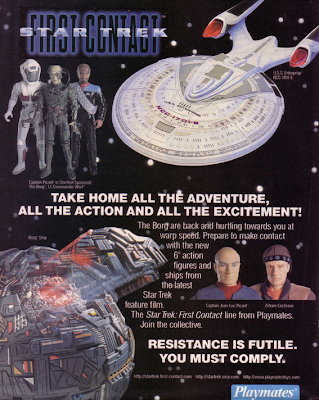 Released in the fall of 1996 to coincide with the theatrical debut of Star Trek First Contact the Playmates action figure line ushered in a new era for the Trek toys of the decade. For the first time we got action figures slightly larger than the traditional 5 inch ones Playmates had been releasing since 1992. The likeness for each actor was also much improved in these figures.
The Picard head is probably the best looking likeness ever in a Playmates action figure. 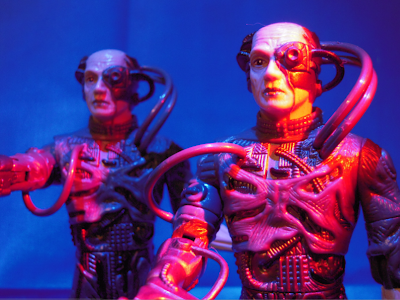 The line consisted of 11 figures with tons of accessories. A mini poster of the Phoenix was included with each figure. The accessories were great. The Starfleet Phaser rifle from First Contact is my all time favorite Trek prop and these figures came with a pretty decent version of this fan favorite prop. The great thing about the rifle is that its actually painted in black and grey instead of the weird neon colors Playmates used for all their action figure accessories throughout the 90s'. The Riker figure even came with a "sims beacon" -- the wrist flashlight prop invented by prop master Alan Sims which was used in most of the Trek shows from the 90's. 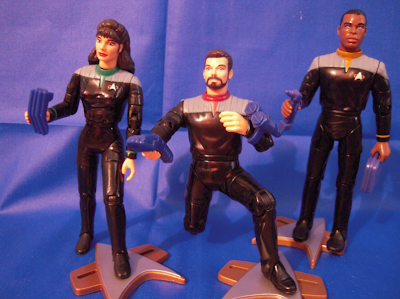 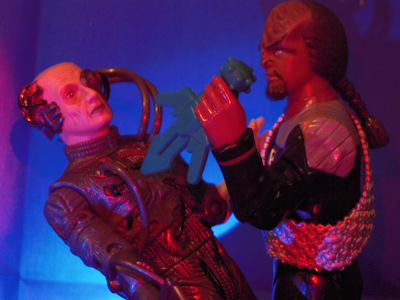 For the first time ever in a Playmates Worf figure the Klingon sash was an accessory which could be removed instead of just painted on, making the figure even more detailed. The Picard in space suit figure is a particular favorite of mine due to the great likeness on the face and the fact that the helmet is removable which is something many fans thought wasn't possible based on the first images of the figures that were released back in the day and the way they were packaged with the helmet on. The space suit was one of my favorite Trek costumes ever until the Enterprise E.V.A. suits came along so this figure definitively makes my list of favorite trek action figures from Playmates. 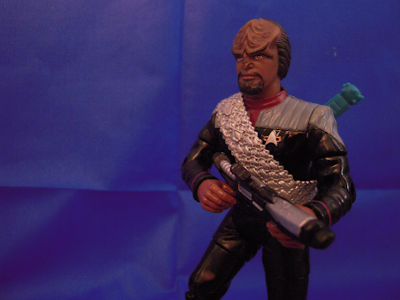 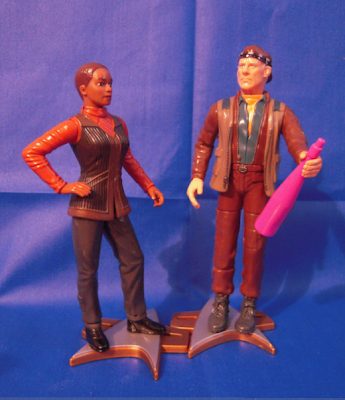 My one disappointment with this line was the Borg figure.
Starfleet's greatest enemies got an amazing make over for the silver screen but the action figure released by Playmates in this line lacks a great deal of detail, plus the body and face are very thin and frail-looking -- nothing like the menacing Borg drones we see on screen throughout the film. 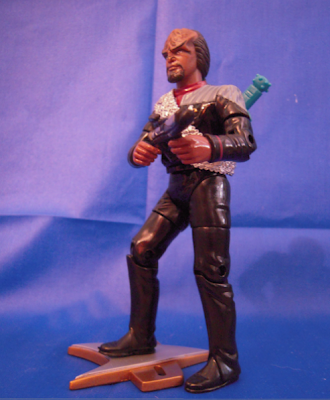 Playmates did not release a Borg Queen figure with this line but they eventually got around to doing that years later in multiple sizes as part of their regular Star Trek toy line and their Latinum edition high-end line of cold cast figures. 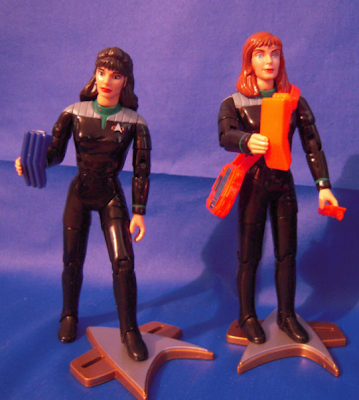 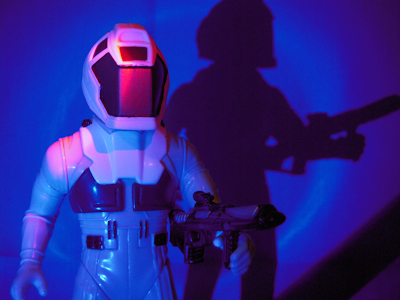 For Next Gen fans this line is a must. First Contact was the TNG crew's finest outing on the Silver Screen and the film was not only a hit with fans but also with general audiences. Something a Trek film hadn't managed to accomplish since Star Trek 4: The Voyage Home. These toys were everywhere during the 1996 holiday season. First Contact featured the last big promotional and merchandising push for a Trek movie until the recent JJ Abrams film. I have great memories of walking into stores that holiday season and being able to pick up these figures as well as a ton of other pieces of First Contact merchandise. It think that was the Golden age of Star Trek before the market got saturated and people stopped caring about Trek. 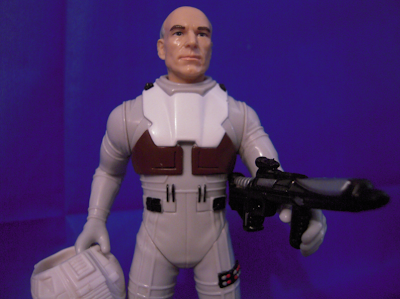 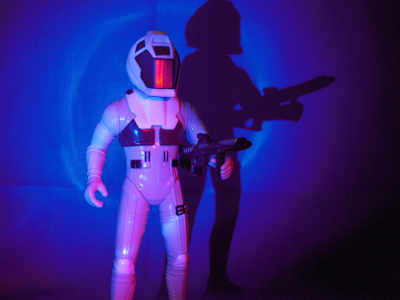 The figures are still available at conventions and on E-bay at some pretty decent prices. If you don't have these yet I highly recommend adding them to your collection. 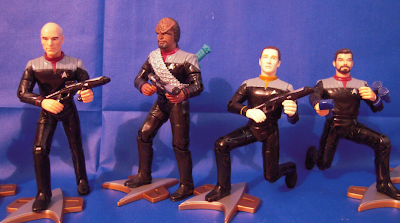 Posted by The Nostalgic Gangsta at 3:26 PM 2 comments: 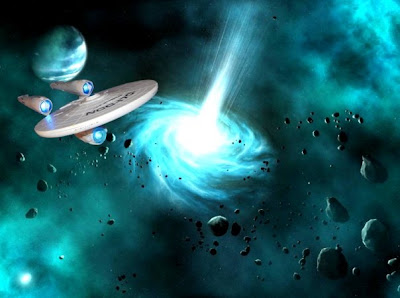 Here are some cool stop motion vids courtesy of our friend djtitoflow. To check out more of his vids visit his blog here. These videos feature some awesome segments featuring Star Trek toys including the new Playmates movie line.

Posted by The Nostalgic Gangsta at 1:08 PM No comments: