The oddyssey of the Galileo 7 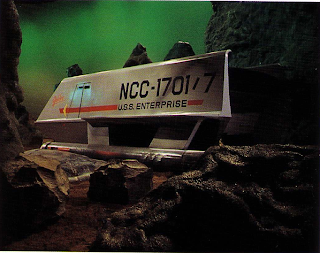 During the early development of the original series pilot Gene Roddenberry had planned to give the Starship Enterprise the ability to land on every planet its crew needed to visit. After consulting with his production team including Robert H. Justman, it was soon decided that landing a ship every week would be too expensive on the special effects budget of a television series. Roddenberry felt if he couldn't land his big ship maybe a smaller craft could do the trick. The idea of the shuttlecraft soon came into play, but as production dates approached the idea was completely scrapped and the concept of "beaming" through the use of a transporter room was born out of necessity. Roddenbery still wanted to feature a shuttlecraft on the show and thanks to a very smart deal brokered between the Star Trek production company and the AMT corporation he was able to get his craft halfway through the show's first season.

The AMT company had been wanting to produce a model kit of the U.S.S Enterprise, and in exchange for the rights to create model kits based on the various ships seen on the show AMT agreed to pay for the construction of the full scale shuttlecraft. The full sized mock up was built in Phoenix and then brought over to the Desilu lot in Los Angeles for shooting.

Matt Jefferies, the show's brilliant production designer was put in charge of designing the look of this new craft. Jefferies, an aviation expert, had initially hoped for a very aerodynamic looking craft, but the high cost of building a life-sized craft with a curved hull forced the producers to reject his initial designs. Jefferies had to settle for a flat-hulled craft instead. 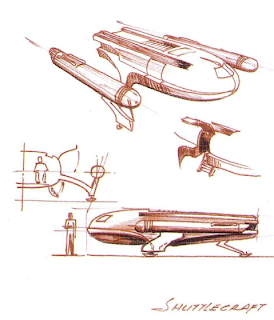 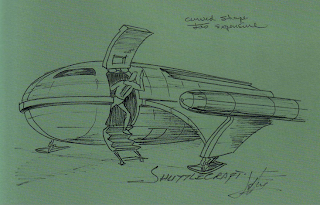 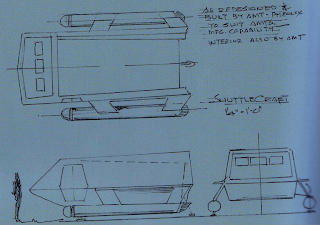 Shuttlecraft with flat hull design deemed more
suitable for AMT to build as a life-size mock-up.

Final flat-hulled design for the shuttlecraft by Matt Jefferies.

The craft made it's debut in the 16th episode of the series, aptly titled "The Galileo Seven". The craft's interior was actually built as a separate set on stage. 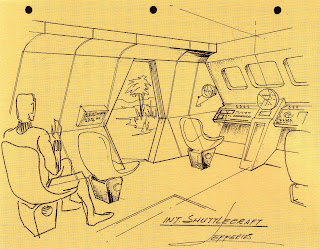 AMT released its first Star Trek model kit, The U.S.S. Enterprise, a few months later in 1967. The shuttlecraft model was released for the first time in 1974 and reissued in 1991 for the show's 25th anniversary. 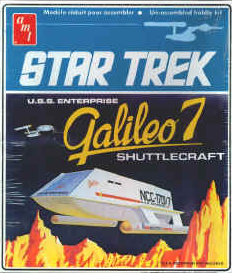 In 1969 after NBC had canceled Star Trek the life-size mock up of the shuttlecraft was donated to The Braille Institute. School officials decided that due to the craft's metal edges and low ceilings it was far from an ideal play environment for kids. A man soon made an offer to purchase the craft from the school as a gift to hes son, a big Star Trek fan. The craft was moved the the man's front yard until a petition signed by all of his neighbors forced him to remove it from the property. At that point a Star Trek fan by the name of Stephen Haskins of La Jolla, California, made an offer to purchase the craft and moved forward with a plan to fix it up and bring it back to its original glory. 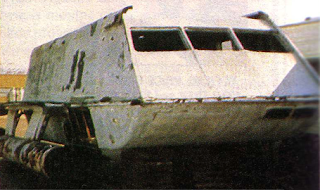 The Galileo 7 prior to its first renovation.

Haskins spent approximately $8,500.00 fixing up the craft. Once the restoration process was completed Haskins exhibited the craft at Creation Entertainment's 20th Anniversary Star Trek convention in 1986. 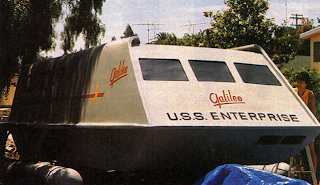 The shuttlecraft after $8,500.00 worth of work
and ready for its first convention appearance.

Years later due to exposure to the elements the craft began to deteriorate once more and Haskins and a crew of carpenters began a second refit of the craft. After years of weathering and two major restorations there is not much left of the original craft, but on December 2005 the craft was reported to be in storage in Ohio. Not much else has been heard since. Haskins had mentioned in the late 80's that he was considering lending the craft long term to The California Museum of Science and Technology. Perhaps if those plans had actually come to fruition the craft would still be in good shape and available for Trek fans to see and relish.
Posted by The Nostalgic Gangsta at 2:29 AM