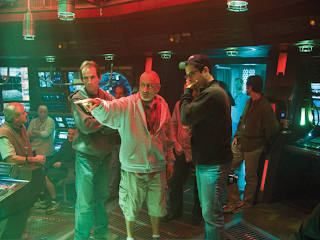 With the rise in HD capture technology I was pretty scared that the new Trek film would end up being shot on High Definition video instead of the classic 35mm Anamorphic format utilized for the previous films. Most big effects heavy films these days opt to shoot HD since the acquisition of images digitally helps out immensely in the digital effects heavy post production work flow. By shooting on film the filmmakers need to scan the negative in order to have digital files for the non linear editing systems and CG visual effects composites. I was very relieved to hear that Dan Mindel was a big advocate for not only shooting on film, but for also utilizing the anamorphic format which gives the filmmakers the highest canvas to work on, as well as a very detailed negative which when scanned at 4k resolution gives us even better images than HD originated content. Spielberg stuck to the format for his last Indy film, even though executive producer George Lucas tried to convince him to shoot on HD as he himself had done for the 3 Star Wars prequels. I was very glad when Abrams and his production team announced their shooting format for Star Trek would be 35mm. 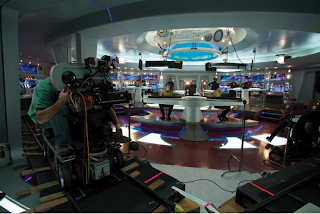 In a recent interview for the International Cinematographers Guild, director of photography Dan Mindel had the following to say regarding his approach to the film's cinematography and his decision to shoot anamorphic: “The first thing I did was try to convince everyone we should shoot in anamorphic. There’s a big surge of people who feel it’s an antiquated work flow, and yet, technically, it’s still the highest method of image gathering we’ve got that works in a corporate-friendly way. Studios and younger producers and some directors have really forgotten these facts.” 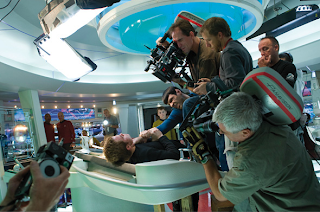 One of the most compelling uses of 35mm optics in the film happens on the Enterprise sets with the now infamous lens flares which add a great deal of realism to the scenes, as they feel raw and captured more than orchestrated. Mindel went on to explain his idea behind this approach and how the 35mm lenses made it all possible: “Literally, at every opportunity, we tried to allow the lenses to physically do what they wanted to do without interfering,” the DP explains. “We also introduced flares manually by shining lights at the lenses to take away from the sterile feel that often arises when you shoot on sets and with green screens. We could add atmosphere and kinetic energy to what was happening by physically flaring the lens. After some time, we came up with two Xenon flashlights, and had an operator mirror the flashlight with the camera’s movement. We’d also hide focus racks by flaring at specific points. Often huge focus racks can be visually disturbing, but if you put a flare in at the right time, before you know it, focus is where it’s supposed to be.” 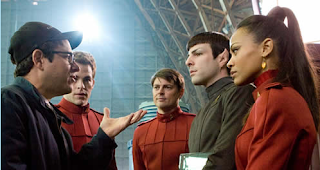 JJ Abrams also chimed in on the technique: “Flares gave the images another layer, another level of interest,” Abrams says. “I’d seen different processes that work well with film, different silver levels, etc. That’s great and cool, but I was going for something beyond the usual kinds of color correction and contrast levels. And lens flares actually made certain moments in images with levels of depth have a distinctly analog and unexpected quality. “Flares are, by nature, unpredictable and a result, obviously, of light and glass. What’s so fantastic is that you can never quite know what you’re going to get. In a massively CG- and effects-heavy film, having another layer of pure, unpredictable, analog, tactile optics was important to keep the feel looking real, special, grounded. It created a sense not just of the future, but it alluded to other things happening not within frame.” 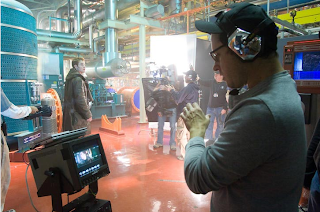 “Dan is a wonderful collaborator,” Abrams says. “He’s wonderfully opinionated and more wonderfully flexible in seizing an opportunity to try something cool even if it might not work. Often, the result is terrific and thrilling.” 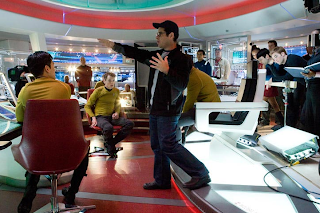 Mindel believes the work of a cinematographer is only as good as the work of those on his camera team: “I have an incredible crew. The unwritten language and communication that takes place when you know someone very well allow us to deliver quickly and efficiently whatever the director needs. And the best thing about working with J.J. is that he’s completely open to suggestions. I’m incredibly proud of this movie for a number of reasons, but mostly the technical aspects that my colleagues and I managed to execute.”

For more on Dan Mindel's work on Star Trek, including his use of Previs and the challenges of shooting some of the most complex sequences in the film such as the orbital skydive and Kirk's run in with the Ice Planet creature pick up this month's issue of ICG magazine, now available at film, and production equipment rental houses as well as select newsstands.
Posted by The Nostalgic Gangsta at 2:01 PM