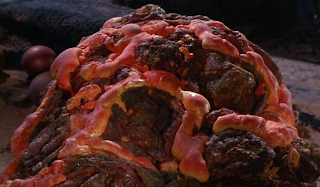 The Horta was the star of the first season episode "The Devil in the Dark", originally airing on March 9, 1967 during the show's first season from a teleplay by Gene L. Coon and directed by Joseph Pevney. 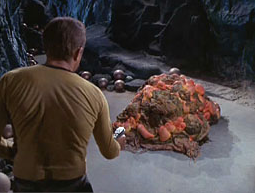 According to William Shatner in his 1993 book Star Trek Memories, the episode is one of his favorites for being exciting, thought-provoking and intelligent, all of the ingredients that made up the very best Star Treks. 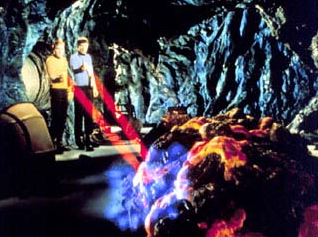 The story about how the episode came together is quite interesting since it was one of the few, if not the only Star Trek story written to accomodate the use of a specific creature. Writer Gene L. Coon saw the Horta creature, or actually the prop that ended up becoming the Horta way before a word of the story had been written. Stuntman / creature designer Janos Prohaska was walking past the Star Trek production offices one day while dragging what looked like a big blob with a raised center and a fringe around its outer edge. Prohaska spotted Coon and soon crawled under the creature to perform and bring it to life. 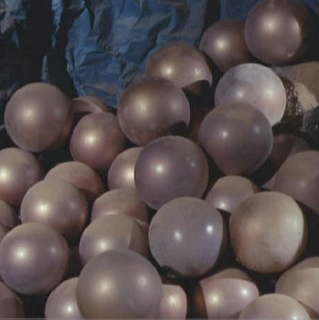 Horta eggs as seen in "The devil in the dark"

The creature had even been setup to drop an egg on cue with a special gimmick that could be controlled by the operator inside of it. Prohaska demonstrated this special feature for Coon and the writer was soon marveled by the creature's design and functions. Coon went back to his office afterward and during the following weeks wrote the script for "The Devil in the Dark" in order to take advantage of this creature that had impressed him, as well as left him squirming on the Desilu backlot. 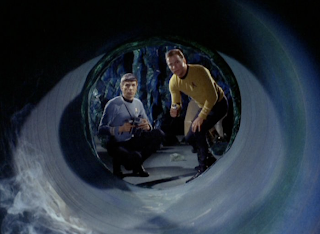 The story Coon crafted featured a sympathetic Alien who is willing to do whatever it takes to protect the existence of its offspring from miners who threaten their underground world. The episode also features one of my favorite moments from The Original Series as Spock attempts to complete a mind meld with the creature, but is unable to due to the creature's agony from its wounds. Spock soon screams out in agony: "PAIN!", in this classic moment. 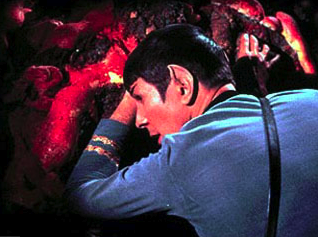 The episode includes some of the ingredients that have always made Star Trek compelling, and the Horta is one of the coolest creatures ever seen in The Original Series. It's also one of the few non-humanoid looking alien creatures ever featured in the franchise's 43 years of existence. Unfortunately the Horta have never been seen again on screen after this episode, but according to Michael Okuda's text commentary in Star Trek 4: The Voyage Home, a Horta Ambassador was supposed to be included in the Federation Council scenes, but there was not enough time to create the costume. 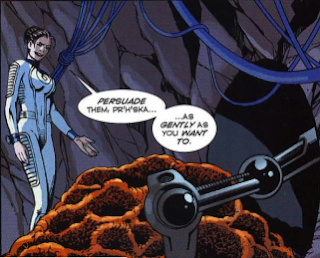 Luckily for fans of the Horta the species made a special appearance in the comic book story "A Rolling Stone Gather No Nanoprobes", appearing in Wildstorm Comic's Star Trek Special # 1 (published in 2001). 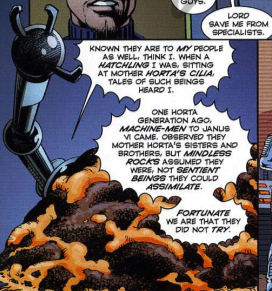 The storyline features a group of Horta partnering up with the Federation on a mining planet which provides the Federation plenty of Ores to mine and the Horta with a unique mineral composition that can nourish them. 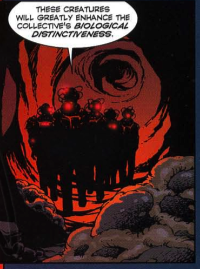 In the middle of a celebration to commemorate the centennial of this partnership between Starfleet and the Horta a Borg cube arrives on the planet and the drones attempt to assimilate every living life form in the mines. 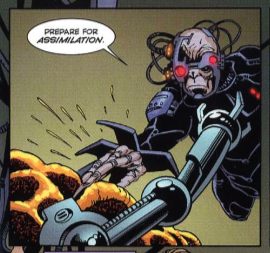 The Horta help the humans fend off the Borg thanks to a pretty clever plan. The story is short and well told. I highly recommend it for those fans who are still waiting for the Hortas' return to Trek. The Horta creature also lends itself perfectly for an action figure two-pack featuring a mind melding Spock with the Horta as seen in "The devil in the dark". I always hoped Playmates would get around to releasing a set like this back in the 90s. Hopefully Art Asylum will grant me my wish in the near future. A Horta figure with the attention to detail, and top notch sculpting the folks at Art Asylum are known for would make any fan of the Original Series go nuts. Lets hope DST and Art Asylum can make it happen.
Posted by The Nostalgic Gangsta at 11:35 PM