The official launch date for all the Playmates toys has finally arrived. I just got back from a reconnaissance mission around town and I'm happy to say that after many long years toy shelves are finally stocked up with Trek merchandise once again. 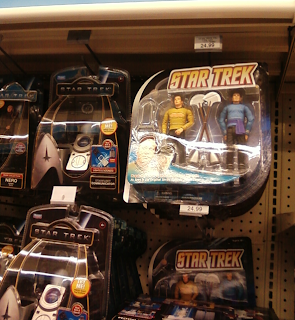 The most impressive assortment can be found at Toys R Us. My location had an entire section devoted to Star Trek, and I've been informed its going to grow in the coming weeks as we get closer to the film's release. The great thing about the Toys R Us section is that it covers more than just the new movie. You can find a lot of other cool Trek swag from its various incarnations and multiple licensees. 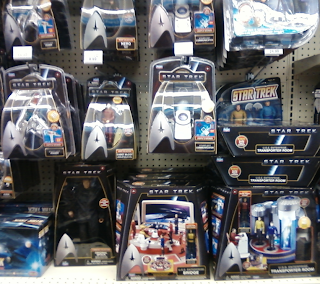 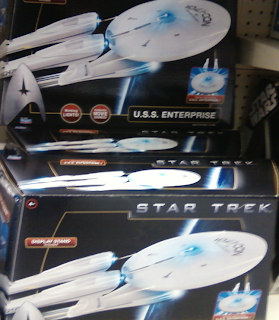 They pretty much had everything from the Playmates line, although they were running extremely low on the 12 inch figures and a lot of characters had already sold out on the 6 inch assortment by the time I made it to the store. The Enterprise ship, as well as the Bridge playset, and transporter room playset were also available, as were all the role play toys. 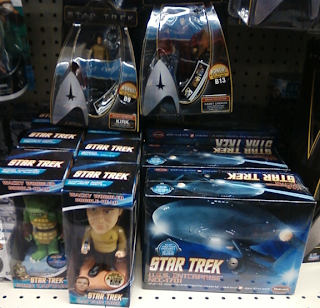 Also available was a wide assortment of Classic Star Trek bobble heads from Funco including a talking Kirk and Spock, as well as a Gorn and an Andorian. I was lucky enough to find one of the metallic color chase variant editions of The Gorn. The model kits from Polar lights were also on shelves. The assortment includes a TOS Enterprise and Klingon Bird of Prey, as well as the NX-01 from Star Trek Enterprise. Mattel's Scene It game was also in stock. 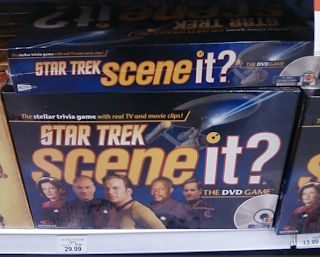 The Art Asylum stuff from DST was in very short supply and they only had a few of the Spock and Kirk two-packs from "Amok Time" as well as from "The Motion Picture". It was very cool to see so much space devoted to Star Trek in stores once more. 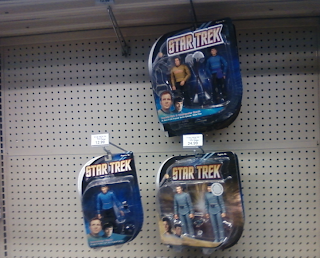 More items such as the Tyco RC remote control ships line and the 12 inch exclusives of Pike and Sulu should be arriving in the coming weeks just in time for a major shelves reset Toys R Us is planning. The entire Trek merchandise section will move to the front of the store which should grab shoppers attention as soon as they walk through the door. 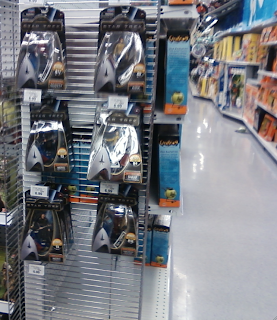 Right now the merchandise seems to be selling well. At Target the entire Trek section had been ransacked. Only a few playsets and some phasers were still available. All the pegs where the figures used to be were completely empty. I hope fans continue to support this line. It's the only way we'll be able to get more items produced by the multiple licensees.

Also this weekend you can get your hands on Entertainment Weekly's summer movie preview featuring Star Trek. The article on the new movie features new quotes from Leonard Nimoy and Zachary Quinto. The latest issue of Wired Magazine has also hit newsstands and the guest editor is none other than JJ Abrams. I just read it last night and I highly recomend it. Wired is one of my favorite magazines and to find some Trek content inside the latest issue is quite a treat. You also get a short comic book story by Kurtzman and Orci filling us in on Spock's whereabouts prior to the start of the new film. 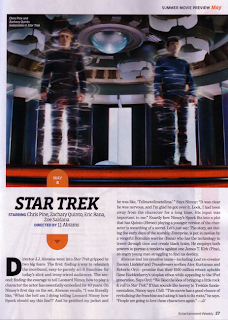 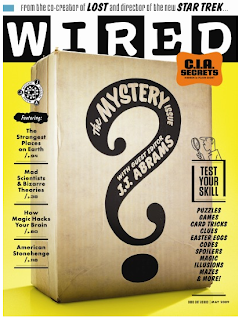 Issue # 153 of Total Film Magazine has finally made its way to U.S. newsstands. I grabbed a copy this weekend and must say I was rather disappointed with their Trek cover story. The article mostly deals with the expectations to the film and the clips shown a few months back during JJ Abrams worldwide publicity tour. Not much info on the making of the film is provided. There is also a retrospective article looking back on all the previous incarnations of the franchise and the elements that JJ will hopefully take from each for his new film. The issue is available in four different covers, each featuring one of the main characters from the film. 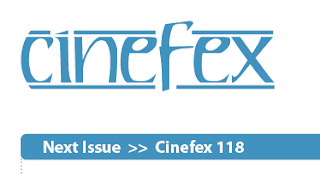 Cinefex Magazine has also released details for their July 2009 issue (#118). The cover story will focus on the Visual Effects for the new Star Trek film. Here's the issue's description from the publisher: "For the 11th installment in the Star Trek feature-film canon, director J.J. Abrams reboots the franchise by returning to the series’ original characters, James T. Kirk and Spock, as they meet and compete at Starfleet Academy, then commence their illustrious careers aboard the newly-minted starship Enterprise. Industrial Light & Magic shares visual effects duties with Digital Domain, Kerner Optical, Lola VFX, Evil Eye Pictures and Svengali VFX". 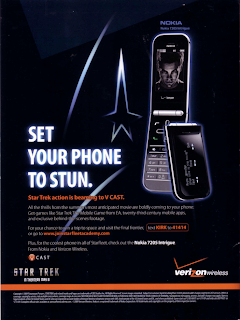 Verizon Wireless has also launched their print ad campagin to tie in with the new Trek film.
They have also produced a new promotional site with exclusive content. The new site can be found here.

Lets close out this edition with Zachary Quinto and Chris Pine, together as they discuss their experiences during the making of the new film. The video interview can be found here.
Posted by The Nostalgic Gangsta at 2:28 PM