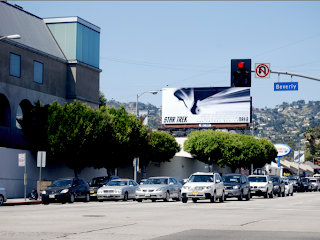 As we get closer to the May 8th release of "Star Trek" more and more pieces of publicity are showing up on almost a daily basis all over town. The above image was taken this afternoon on Beverly boulevard in the heart of Beverly Hills, another prime spot for a high profile ad. You can even see the hills right behind it. The "Star Trek" ad is also popping up on the new digital LCD billboard screens that have been installed all over Los Angeles. The ad on those also plugs the film's IMAX release, changing from the standard poster to the IMAX version. I'll try and snap a shot of one of those soon. 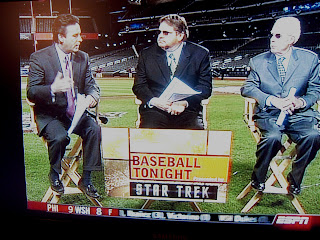 This week is future week on ESPN and "Star Trek" is the main sponsor for a lot of the programming. "Star Trek" has been the presenting sponsor on Baseball Tonight, so if you tune in you can see the TV spots for the film throughout the broadcast as well as the film's logo right in front of the hosts throughout the entire post game broadcast. Also last night the "Not your father's Star Trek" TV spot for the film aired on HD during FOX's broadcast of "American Idol". Another big move from Paramount since "Idol" brings in close to 30 million viewers a week. 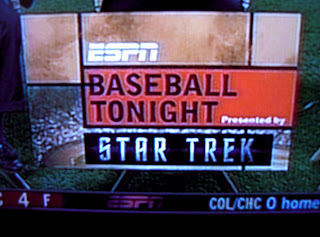 On the next edition of this section we'll be taking a look at the billboards and ads for the film on display at Paramount Studios on Melrose Avenue -- the home of the "Trek" franchise.

Let's close out this edition with some red carpet interviews from the "Star Trek" premiere at the Sydney Opera House courtesy of UK's Sci-Fi Now.

Posted by The Nostalgic Gangsta at 5:35 PM