This week the Star Trek Remastered project will come to a close with the broadcast of the final episode to get the digital remastering treatment: "The Cage". This historic episode was the first pilot ever produced for Star Trek back in 1964. In honor of its upcoming airdate as part of Star Trek Remastered I though it would be ideal to take a look back at the making of this groundbreaking hour of television. 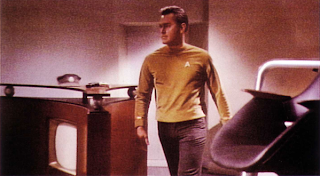 On November 23, 1964 a group of recently cast actors including Jeffrey Hunter got together at Desilu Studios' Culver City lot in order to begin rehearsals for the pilot episode to Gene Roddenberry's Star Trek. With Robert Justman as Assistant Director, Robert Butler directing, and Herb Solow as the executive in charge of production for Desilu, Gene Roddenberry set out to make his concept of "Wagon train to the stars" a reality. The group took Thursday off to celebrate the Thanksgiving holiday and then on Friday the 27th of November, on Desilu's stage 16 cameras rolled for the first time on what would become a television legend. 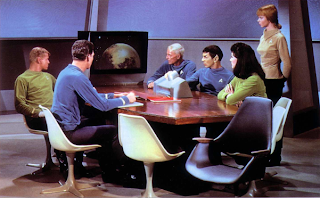 With a budget of $451,503.00 Justman had been forced to plan an 11 day shoot, a very short amount of days for something as complicated as "The Cage". The production was soon plagued with multiple problems that would go on to make it impossible to come in on time and under budget. Everything from birds and bees living on the rafters of the soundstage to problems with the stage's lack of adequate sound insulation made it especially difficult for the filmmakers to shoot such a complicated script. The show ended up going well over schedule and in the end the budget ballooned to a total of $615,751.00. 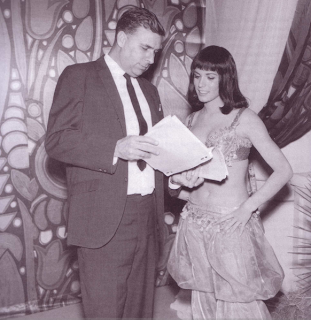 From day one NBC didn't really like the character of Spock, their sales department felt the character was too "devilish" looking and they figured they'd have a tough time selling the show to wholesome American families with such an odd creature in the cast. They never really liked Majel Barret either in her role of "Number One". That was a sentiment shared by many in the production, but there was no convincing Roddenberry to drop her before the start of principal photography due to the extra-marital relationship he was having with the young actress at the time. 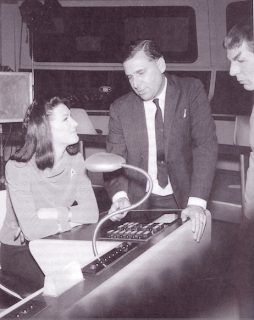 Early on during the pre-production period "Lucy" art director Pato Guzman was brought on board to begin designing the main sets for the pilot. At the same time designer Matt Jefferies was brought in to figure out the look of this massive starship which would take the characters out into space for their weekly adventures. Halfway through this process Guzman decided to return to his native Chile, and soon a replacement was found in German designer Franz Bachelin. 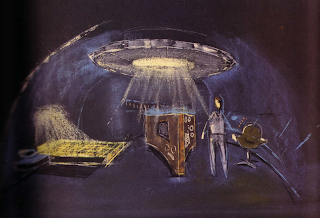 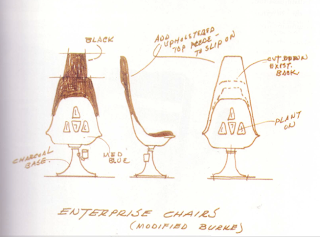 Designs for modified chairs to be used on the bridge.

Even through this setback the design process never stopped thanks to Matt Jefferies, who not only designed the exterior of the ship, but soon began work on the interior as well designing all of the show's main sets including the now iconic bridge of the Enterprise.

Leonard Nimoy, a struggling actor at the time, who had already worked with Roddenberry on an episode of The Lieutenant, was the Trek creator's first choice to portray the character of Spock. Casting director Joseph D'Agosta suggested film actor Jeffrey Hunter ( The Searchers, The Longest Day, King of Kings) for the role of Captain Pike. Everyone involved was pleased to get a respected film actor as Hunter to join the cast. 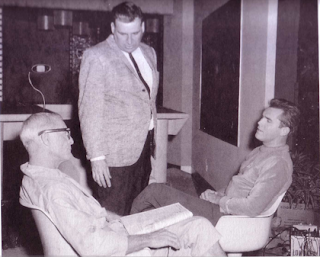 With casting well underway Justman turned his attention to the daunting task of planning for the show's multiple visual effects on a television budget. Justman first turned to the Howard Anderson Company, an effects house that rented out space on the Desilu lot at the time. Under its arrangement with the studio the company became responsible for providing all the opticals for the pilot. 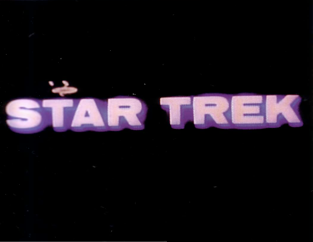 Darrel Anderson became the supervisor for the show's effects on behalf of the Anderson company. He would be in charge of coordinating the shooting for every sequence involving optical work, and he would also be on set during principal photography in order to approve every camera setup involved in these sequences in order to make sure the shots would line up with the effects elements his company would go on to create. 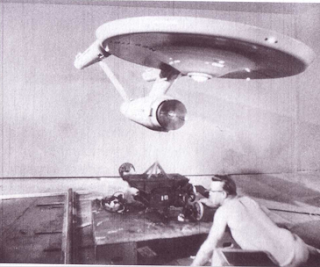 The Anderson company would also be responsible for building and filming the miniature model of the Enterprise. This work would be completed off lot at another one of the Anderson Company stages. 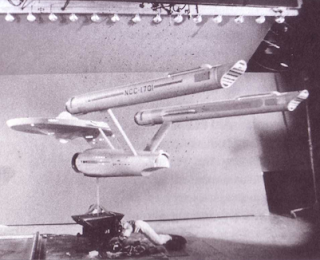 During pre-production for the pilot multiple make-up tests were filmed in order to figure out the look of the many prosthetics and specialty make-up required for the show. Fred Phillips was brought on board to handle this and one of the specific tests he had to conduct in pre-production was for the Orion Slave Girl, a character the script called for which would have green colored skin. Majel Barret was brought to the make-up department and painted green in order to conduct the camera test since the role had not yet been cast. After filming Barret in full green colored make-up the footage was sent to the lab. Once the print returned the producers were surprised to find how the green on her skin barely showed up on screen. After a phone conversation with the technician at the lab, who told them how hard the lab guys had to work in order to get rid of that mysterious green tone on the actress' skin, the producers realized what had happened and informed the lab to re-print the takes without removing the green since it was there on purpose. 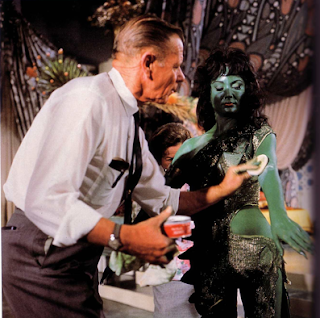 Fred Phillips and Leonard Nimoy weren't happy at all with the sets of Vulcan ears they kept getting from the make-up shop at Desilu. Frustrated, Phillips went on to call one of his friends at MGM and pay out of his pocket for higher quality prosthetic ears since Desilu would not approve the higher fee for the ears. A perfectionist, Phillips would not allow Nimoy to go on camera with prosthetics he felt were not up to his standard. Nimoy has said in multiple interviews that Phillips really saved him and "Spock" by doing that. 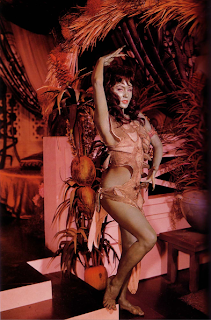 William Ware Theiss was brought on board to design the costumes and his Starfleet uniform design would influence every type of uniform used for the next 4o plus years of the Star Trek franchise. He would also return to Trek in 1987 to redesign the Starfleet uniforms for Star Trek The Next Generation. 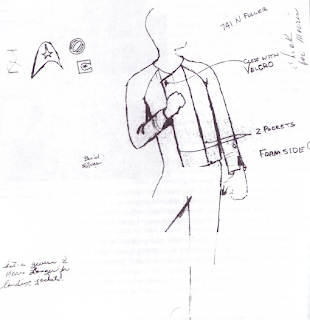 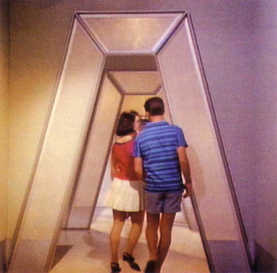 The last piece of the puzzle to fall into place was composer Alexander Courage, who during the episode's post production process would go on to write the now famous theme to Star Trek. Gene Roddenberry, looking to get some money out of the show's music publishing rights decided to write lyrics to Courage's theme without even telling him in order to include them on the sheet music and receive 50% of the piece's royalties. Insulted and upset by Roddenberry's move (the lyrics made no sense and didn't even line up with the music, plus they were never even recorded for that matter) Courage decided to remove himself from any future Star Trek productions. By February of 1965 the pilot was ready to be screened for NBC executives. The screening took place in Los Angeles at a projection room in the Desilu executive office building. The NBC executives appeared to be blown away by the show's production, its scope, sounds, and music. They seemed less impressed with some of the actors. The executives left the screening after informing Sollow that they were really impressed and they would soon be in touch regarding the future of the show on their network.

Then the unthinkable happened. Even though there where many elements the network and its sales department disliked about the pilot, what they liked was enough to grant the filmmakers a second chance. Soon NBC ordered a second pilot for Star Trek. The order came with a hefty list of requests including the removal of Majel Barret as "Number one" and Leonard Nimoy as "Spock", but Roddenberry and company where up to the task. They picked their battles with smarts and moved forward with production on "Where no man has gone before..."
The rest as they say is future history.

Posted by The Nostalgic Gangsta at 4:27 PM